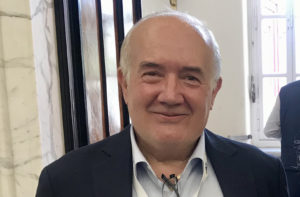 Giampaolo Ciavolella is the new Technical Commissioner Chairman for Gymnastics in the CSIT!

CSIT is actually looking for competent sports experts, who like to use their knowledge and skills to advance the CSIT in serving international amateur sport! Read the full story here. During the CSIT Excom meeting in Vienna CSIT decided to re-activate Gymnastics in the CSIT World Sports Games 2021 in Cervia (Italy) and named Giampaolo Ciavolella as the new Technical Commissioner Chairman for Gymnastics.

Giampaolo Ciavolella is currently engaged as National Coach of the FISAC Teamgym National Italian Teams and FISAC National Coordinator of the National Technical Responsible for all the technical disciplines (Acrobatic, Cheerleading, Parkour, Ropeskipping, Aesthetic, Tumbling, Trampet, Teamgym, Fitkid, Stunt, Acrodance) and is very pleased to be named as TC Gymnastics for CSIT

Read the Curriculum vitae of Giampaolo Ciavolella
Giampaolo Ciavolella was a member of the Italian Gymnastic Federation from the 31 May 1982 after attending at the Faculty of Physical Education of the University of Bologna. He was trainer from 1992 to 1995 in the International Camps at the Olympic Center in Bekescsaba (Hungary). He worked, for the acrobatic elements, for the National Aerobic Team of Lithuania preparing the World Championship.

In 1988 he founded the gymnastics Club “Biancoverde” in the city of Imola, bringing it to a “A” National series, and trains many gymnasts of national and international level (One European Champion in vaulting and 2 Olympic members). From 1993 to 2004 he was in charge on behalf of FGI Regional Committee of Emilia Romagna as Director for the General Gymnastics section. From 1993 to 1998 Regional Director Emilia Romagna for GG Juries. Regional Manager in the same years for the activity of Aerobic Gymnastics, whether professional or amateur.

From 1992 to 2004 he held the following positions:
Regional Manager for CONI (Olympic National Committee) for Gymnastics.
Regional Manager for the technical reports of FGI with the Ministry of Education
Lecturer in training courses in National Gymnastics for Physical Education Teachers of schools of all levels
Member of various National technical committees and creator of many technical programs still in use in the various sections of the FGI (Italian Gymnastic Federation).

Since 1995 Manager / Lecturer for F.I.G. (International Gymnastics Federation) for training and refresher courses for National Coaches in Gymnastic for All. Until 2006, National Director FGI’s Officials and Coordinator / Head of the National experimental non- Olympic competitive activities. He held the position of National Manager and Responsible, for the Tumbling, Trampet and Teamgym disciplines for FGI. Co-founder and Sports Director of Acrobatic Academy in Cesenatico. National Technical Coordinator for all disciplines pertaining FISAC (Italian Federation of Sports Acrobatic and Choreographic), Director of the Federal Technical Center and Coach of the Italian National Teams in the following disciplines: Teamgym, Trampet and Tumbling. Acrobatic Coach of the Italian National Team of Alpine Skiing Downhill and Slalom, Men and Women.